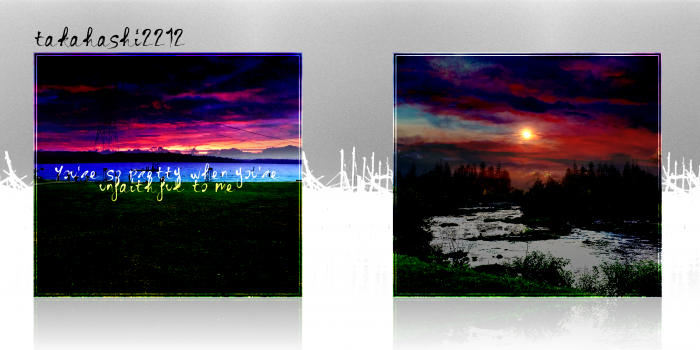 while i like the original surfer rosa cover i made, i never felt it (or bossanova for that matter) fit the style of the doolittle and trompe le monde covers i made to start this set off. most notably due to the fact that while the latter two made use of images of nature, the former two actually used images from the albums photo shoots and cd booklets.

after those first two covers, i envisioned the four covers being based on the four seasons (with doolittle being fall, trompe le monde being winter, surfer rosa being summer, and bossanova being spring). those plans fell through, and i ended up just doing my own thing for the other two. i finally decided to actually follow through with this plan (kind of), so this box is a thing now.

once again, thanks to my good friend chris for the photos used here (i actually used his pictures for trompe le monde and doolittle but i left him uncredited)

The color tone on the photo from the back feels very summer-like to me, while the front has a more winter-like feel to it (I find that interesting, since you've based the cover on the seasons)

Is this suppose to be a Vinyl album cover? or just a minimalistic design for a CD cover?

Yeah, I noticed that myself. Might have something to do with the fact that the back's base image was a beach. The front's base image was the water at one point, but I ended up scrapping it.


I generally design these as CD cases, but I guess this would also work as a vinyl cover

Nice, I like the simple background presentation as well.