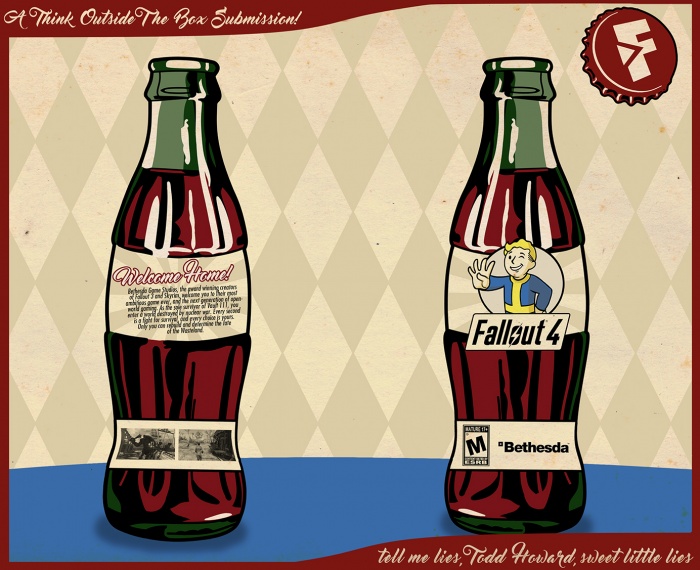 Alright, here's my thing for the Think Outside the Box Challenge, and since I didn't have any other ideas, I went with Fallout 4. Now, I'll let this be clear, I don't like Fallout 4. I think it removed so much stuff from the previous games that made them as good as they were, that felt like a lesser version of those previous games but made allegedly for the next generation (I say allegedly because it looks like an early 360 title). Game opinions aside, here's what I've made. As you can probably tell from the presentation, I tried to go for an old advertisement sort of feel, with a bit of a vintage look (like most of my stuff recently, come to think about it). I'm not really that sure if it looks good or not, so I'll just let you be the judge of that.

Anyways, as always, constructive criticism is welcome, and huge thanks to TheTombRaider for his help and feedback on the forums, it's greatly appreciated. I might have rushed a bit on uploading this one, so if you see anything that needs fixing feel free to point it out, and I'll try to update this as soon as possible. Also, credit to Ausman101 for the Bethesda logo, and Titan38 for the ESRB rating.

I don't get it; where does the game go?

In theory, the game would be located in the widest part of the bottle, so you could pretty much imagine that this box is very big. I know, sounds extremely illogical and combersome if this was a real thing, but oh well.

@Sarashi Lest we forget, this is trying to be a box in the shape of a bottle, not an actual bottle in which the game is located in, although that would be quite funny.

@Paper That would probably the dumbest thing from a business standpoint I've ever heard. It's great!

Although, wasn't there a special edition of a game that came with a bundle of crap but not the actual physical game?

This box is in the PC section. So it runs on PC!

You just have to pour some of the Fallout 4 into your PC's hard drive, wait, watch your PC going ape sh*t for a while, and then you could probably play the game

Just wait 'till the Game of the Year Edition a.k.a. 10 liter bootle

@Higashi89 Or you could drink the bottle and live the game yourself. Now that's some immersion right there.

@FrankBedbroken but you gonna pee the game later, and then buy another copy of Fallout 4

Awesome, but those screenshots bother me for some reason... maybe because they aren't warped to go along with the curvature of the box? Great job Frank.

I understand why you have them the way they are, though.

Thanks, Martin! :D I'm pretty unsure about that whole area as well, so maybe I should change it?

@Martiniii332 Thanks for the help! :D

A piece of shit.

Is that what you wanted to hear?

@FrankBedbroken
you funny man)) this is not boxing is an art so you need to load it in the appropriate section.something like this...........

@WANDERLEI SILVA what's the appropriate section for this? the trash?

@Vince_1990
his place in the section other

@TheTombRaider
is to blame for a crappy google translator

Alright, minor update, the screenshots on the back now fit to the shape of the bottle itself. Thanks to Martin for the suggestion! :)

I looooooove it! Vintage, retro, grungey, etc. art is my favourite, and the idea of the bottle is so unique. Amazing job, Franco! :D

this is so cool franco hahah, good stuff.

I think the concept is pretty cool, but the execution isn't fully there. I think you still need to play around with the way the text and pictures wrap around the bottle. Otherwise, it reads as a flat object considering how flat the bottle is itself. However, design wise this is very fitting for Fallout. Great job.

Thanks, Lucid! Making it flat was the idea I had at first, considering that it would be just a box in the shape of a bottle, but I might modify the perspective of the text and the images to make it seem a bit like they're curved and that it feels like an actual bottle. Again, thanks for the feedback! :D

Well, I actually spoke too soon, I can't seem to pull off the effect well. It just ends up looking too blurry and too distorted. Sorry. :/

Fun idea and nice presentation. Although I can dig the art style and typography, i'm not really feeling this one (in terms of the bland color scheme and packaging issues) maybe I'm a bit harsh, idk?

Thanks, Bastart! I can totally see where you're coming from, so it's cool, man, no worries. :)

something something the future

you're a prodigy frank

NOW, THE WRITING'S ON THE WALL
IT WON'T GO AWAY
IT'S AN OMEN

todd howard lies, he only wants your wallet

@FrankBedbroken He's had my debit card details since Morrowind

Lmao, really? I seriously wasn't expecting this one to get HoF!

Anywho, huge thanks everyone for their likes and comments! :D

You really deserved man in this site, congrats for this nice hof . . .